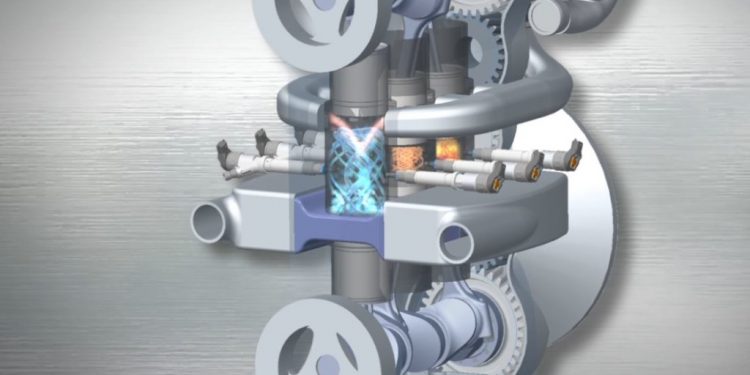 The U.S. Department of Energy’s (DOE’s) Argonne National Laboratory is working with Achates Power, Inc., and Delphi Automotive to develop an innovative new engine that could yield efficiency gains of up to 50 percent over a comparable conventional engine.

The research is being conducted under a three-year project funded by a $9 million award from DOE’s Advanced Research Projects Agency-Energy (ARPA-E) and an additional $4 million of cost share from the team members.

“Conventional spark-ignited engines have improved so dramatically over the past few decades that there is little room to make big efficiency gains,” said Steve Ciatti, who will be the experimental lead for Argonne. “You need a game-changer to get into large double-digit efficiency gains, and we believe this engine is capable of doing that.”

The new engine will meld the best characteristics of gasoline and compression ignition engines with an innovative piston architecture refined by Achates Power that sets two pistons moving in opposition in one cylinder. As the crowns of the pistons slide toward each other, they compress a mixture of air and gasoline to such extreme pressures that the mixture auto-ignites without the need for spark plugs in a process known as compression ignition.

As the pistons reverse course and slide to opposite ends of the cylinder, ports machined into the cylinder allow exhaust gases to escape while fresh air is taken in, then the pistons move together again to compress and ignite in a two-stroke cycle. The design eliminates cylinder heads — which are a major cause of heat loss and inefficiency in conventional engines — and allows the engine to run with diesel-like efficiency and power, while maintaining gasoline’s emissions benefits.

An analysis by Achates Power indicates the new engine will yield fuel efficiency gains of more than 50 percent compared with a downsized, turbo-charged, direct-injection gasoline engine, while reducing the overall cost of the powertrain system.

Creating such a novel engine will require the expertise of all the team members, who bring together decades of experience in various aspects of engine design and production.

“The dynamics of this team are really perfect to make this project work,” said Doug Longman, who will be the project manager for Argonne. “Combining Argonne’s scientific and engineering experience with Achates Power’s engine architecture and Delphi’s expertise in fuel injection and gasoline direct-injection compression ignition will give us the tools to develop an engine we think is going to show very large efficiency gains.”

Another key to the success of the project will be the modeling and simulation of the complex fluid dynamics and combustion inside the engine, which will be conducted through Argonne’s Virtual Engine Research Institute and Fuels Initiative (VERIFI). By using high-performance computing to model and predict the movement of fuel and air in the cylinders, the VERIFI team will be able to optimize the design of the engine and fuel injectors using computing rather than prototyping, which will enable accelerated development.

Shorter development time through computational modeling and efficiency gains developed through experimental research will be critical to the creation of an engine that can be widely adopted commercially. Many engines have been proposed over the years that show benefits over conventional spark-ignited gasoline engines, but the efficiency gains have not been dramatic enough to convince auto manufacturers to retool production lines and car designs to incorporate the new approaches. This novel research team is poised to break that barrier and create an engine that could transform the automotive market.

Argonne National Laboratory seeks solutions to pressing national problems in science and technology. The nation’s first national laboratory, Argonne conducts leading-edge basic and applied scientific research in virtually every scientific discipline. Argonne researchers work closely with researchers from hundreds of companies, universities, and federal, state and municipal agencies to help them solve their specific problems, advance America’s scientific leadership and prepare the nation for a better future. With employees from more than 60 nations, Argonne is managed by UChicago Argonne, LLC for the U.S. Department of Energy’s Office of Science.

The U.S. Department of Energy’s Office of Science is the single largest supporter of basic research in the physical sciences in the United States and is working to address some of the most pressing challenges of our time. For more information, visit the Office of Science website.