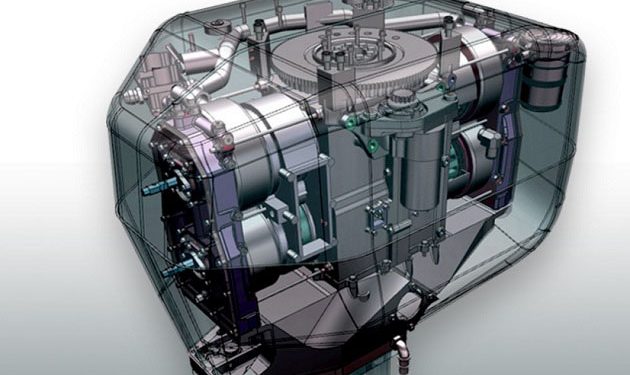 The Cox Powertrain CXO300 outboard engine, potentially destined for the Royal Navy (RN), is still undergoing trials ahead of a future launch and full production run.

In 2013 the UK MoD confirmed an order for what was then a prototype stage in the development of a lightweight diesel engine intended for marine applications on fast boats used by the RN. This could see the engines fitted to RIBs and other craft in the RN inventory.

The engine concept is based on a supercharged, two-stroke diesel opposed piston architecture with Scotch Yoke crankshaft and a central injector position.

Delivering 300hp and weighing 300kg, the CX0300 is designed for commercial, government and military applications.

‘The engine is still in its development stages and currently undergoing trials,’ said Joel Reid, business development manager at Cox Powertrain, without providing further details of a future launch or full production run.

It is thought, however, that announcements in this regard could be made in the near future.

Speaking at Seawork International earlier this year, Cox CEO Tim Routsis said the development of the CXO300 was entering its final stages of what had been a five year development programme and described the new engine as utilising ‘game-changing technology’ ahead of its future launch.

An earlier release from Ricardo stated that the armed forces of NATO countries are increasingly mandating the use of a single heavy fuel across multiple defence applications. The use of heavy fuel or militarised diesel engines would help in this regard.

The RN is currently undergoing a revitalisation of its RIB fleet with the first of 60 new Pacific 24 Mk IV craft delivered earlier this year from manufacturer BAE Systems. The £13.5 million programme are supposed to bring increased capability, reduced weight and greater comfort for embarked personnel.

Are Opposed Piston Diesels the Future of ...