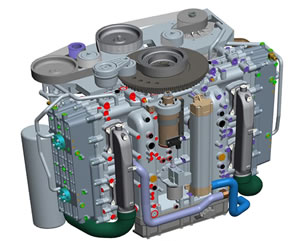 The Cox Powertrain concept is being developed in collaboration with the engineering R&D firm Ricardo. The project has already attracted £6.7 million (US$10.1 million) in private investment, in addition to previous MoD funding. The concept is based on an invention of Cox Powertain’s founder, former F1 designer David Cox, and is specifically designed for outboard use.

The two primary investors in EcoMotors are Khosla Ventures and Bill Gates. Vinod Khosla, who founded Khosla Ventures in 2004, was founder and CEO of Sun Microsystemsand formerly a general partner at Kleiner Perkins.

In April 2013 EcoMotors announced a deal to have Chinese auto parts giant Zhongding Power build a $200 million factory in the Anhui Province in eastern China. The factory hoped to produce 150,000 OPOC engines per year, with a further site reserved to take production to 400,000. The engineblocks will be made of CGI ( compacted graphite iron) and will be produced at a fully automated Zhongding foundry in Anhui by a licence from Sintercast of Sweden which is the world leader in CGI-technology. The production was first annonced to commence in 2014 but is now delayed to the second half of 2015.

The JLA engine features a new configuration of the parts present in traditional engines, prescinding from pieces that generate energy loss and distort the convertion between "available energy" and "energy produced". This improvement in efficiency is achived through a rellocation of the functions required by teh internal combustion engine, referral to other components already knows, to which endows the ability to perform more than one function without increasing their complexity, only increasing their efficiency.

A Fresh Approach to the Internal Combustion Engine

At Pinnacle Engines, we have utilized breakthrough engineering to create an entirely new ultra-efficient engine technology based on a four-stroke, spark-ignited, opposed-piston, sleeve-valve architecture.

Our engine performance has been demonstrated in vehicles being readied for production. We are delivering outstanding results… in vehicles, on the road, right now.